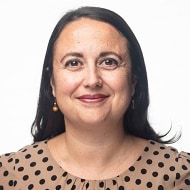 Romina is currently working in the Administrative Law & Occupational Regulation team, primarily focusing on merits review matters before the Victorian Civil and Administrative Tribunal of decisions made under the Health Practitioner Regulation National Law (Victoria) Act 2009, the Victims of Crime Assistance Act 1996, and the Freedom of Information Act 1982, as well as occupational and professional regulation and disciplinary matters referred to the Tribunal. Romina has recently worked on an application for a registration order under the Status of Children Act 1974, which is the second case of its kind known in Victoria. Between 2011 and mid-2016, Romina worked in VGSO's Workplace Relations and Occupational Safety Branch, providing advice and advocacy on disciplinary procedures and appeals, termination, occupational health and safety, transfer of employment, redeployment, redundancy, accident compensation and return to work obligations, discrimination, unfair dismissal, general protections, privacy, disputes under various public sector workplace agreements, employment-related policies, and statutory interpretation of a number of employment-related legislation. She has also conducted and advised on a number misconduct investigations.

In early 2016, Romina also worked on the State's representation in the Independent Broad-based Anti-corruption Committee's public hearing in Operation Dunham.

Romina has had a long-standing career in the Victorian Government. She commenced at the Department of Justice in 1999 at the Victims Support Agency, and subsequently worked at the Working with Children Check Unit and the Equal Opportunity Commission. She then worked at Victoria Police's Human Rights and Legal Policy Units. In 2010, Romina also worked at the VGSO's Victoria Police Branch where she provided advice on various matters, including disciplinary procedures and investigations.