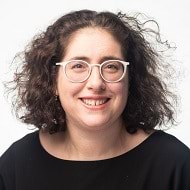 Penina works as a Managing Principal Solicitor within the office's dedicated Victoria Police Advisory Branch. Her particular areas of expertise include statutory interpretation, police powers and duties, issues surrounding delegations and authorisations, privacy, administrative law and disciplinary matters. Prior to coming to the Police Advisory Branch in 2016, Penina worked in Government and Public Law as an administrative lawyer.

Penina is an experienced administrative lawyer who has acted for government in a broad range of administrative law and regulatory proceedings. She has advised government, and particularly regulators, on making proper and fair decisions, the proper exercise of powers, delegations, and on statutory interpretation. Penina has also carried out a number of whole of government projects to ensure government compliance with new legislation. In 2013, Penina became a Law Institute of Victoria Accredited Specialist in Administrative Law.

Penina has presented a number of seminars to government agencies on topics such as delegations, good-decision making and natural justice.

Penina completed her Articles with VGSO in 2005, and previously worked as Social Policy Advisor with the Department of the Prime Minister and Cabinet from 2004-2005.