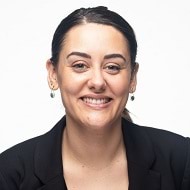 Jenny is a solicitor in the regulation and administrative law team at VGSO. She works on a range of enforcement and administrative law proceedings, providing advice and litigation services in both the Victorian Civil and Administrative Tribunal (VCAT) and the Supreme Court. She also advises the Attorney-General in relation to her role as Protector of Charities in the charities space.

Jenny advises clients in the prosecution of summary and indictable offences on behalf of regulators and statutory authorities, as well as judicial review and other administrative law proceedings for regulatory authorities and law enforcement agencies.

Jenny has exposure to judicial review proceedings before the Supreme Court and involvement in a number of proceedings before VCAT, including in relation to freedom of information requests and victims of crime matters. Jenny has also assisted in acting for a number of regulators in relation to summary prosecutions before the Magistrates' Court, and disciplinary and misconduct proceedings before various Tribunals, including reviewing and advising on sufficiency of evidence and advising on whether conduct constitutes misconduct. These matters have related principally to fisheries, medical practice, and food safety. In addition, Jenny's time at the VGSO has also allowed her to be involved in a diverse range of matters across the Office, including commercial and property matters, native title work, planning and environmental and Constitutional matters.

Prior to joining the VGSO, Jenny worked as a paralegal and research assistant at an international commercial law firm, and as a tutor in various Arts and Law subjects at the University of Melbourne.