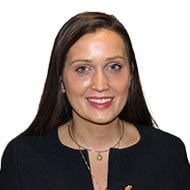 Alanna leads the Inquiries, Prosecutions and Administrative law branch at the VGSO. She is an experienced government and commercial lawyer and has demonstrated expertise in:

Alanna has a strong understanding of the client perspective and imperatives of balancing great legal advice with great strategy, along with how to advocate strongly for the State's position in complex, information-rich, fast-moving environments. Her deep experience in Royal Commissions and major litigations/ projects means she can give forward-thinking, practical and strategic advice to help clients get the best outcome for their agency and the State.

Prior to joining the VGSO, Alanna worked as the Deputy General Counsel within the Department of Treasury and Finance's Office of the General Counsel overseeing the legal function and legislation development in relation to multi-billion dollar infrastructure, energy, environment and financing projects, has led numerous State significant litigations and the delivery annually of State Budget legislation. Alanna holds a bachelor of arts/laws (Hons) and a master of public administration both from the University of Melbourne and is also a qualified Prince2 project manager. She has previously worked in private practice and management consulting in the areas of public infrastructure financing, development and delivery, planning and the environment.